First, for some background to our story.

Vultures have played a pivotal role in the development of what might be termed ‘movement ecology’. From the very early trials of initially heavy GPS-devices fitted on birds, vultures have served as models due to their large bodies and long travels. Thanks to this technology, we now know much more about the distances vultures are able to travel great distances and their wide-ranging behaviour. Using uplift currents of warm air (thermals), they can soar high in the sky without beating their wings, thus saving energy and facilitating travel over wide ranges in search of food.

In the course of the “LIFE with Vultures” project, GPS tracking devices will be fitted to a large sample of the current population, as well as to all individuals that will be imported from Spain as part of the restocking efforts of the project. These devices are already used by the project team to gain insight into the behaviour, movement ecology and the conservation of vultures.

Griffon Vultures, in Cyprus and in other countries, concentrate their daily travels in the middle of the day, when thermal updrafts are strongest. From what has been shown by other studies and also through the GPS tracking monitoring of vultures in Cyprus, the beginning of spring is always marked by a significant increase in the distances travelled. However, this behaviour does not apply to all individuals. Namely, breeding individuals stay close to their nesting site, while non-breeding individuals largely abandon the breeding colonies and start to wander around to forage and explore new areas.

And now for the tale of our local wanderer…

An example of such a non-breeding individual is a Griffon Vulture known as “CAA”. CAA is a Griffon Vulture of unknown sex that was born in early 2013 in Crete and was transported, along with other individuals, to Cyprus in the same year as part of the Project “GYPAS” in an effort to boost Cyprus’ Griffon Vulture population. After spending a year and a few months in a suitably designed acclimatization aviary managed by the Game and Fauna Service, the bird was released back into the wild in February 2015. Thanks to the LIFE with Vultures project, CAA was fitted with a GPS device in mid-September 2020 and the project team is now closely monitoring its movements and gaining valuable information on the population’s feeding and home ranges.

Of the four Griffon Vultures currently fitted with GPS devices, “CAA” seems to be the ultimate wanderer. In less than two months (March-April), CAA travelled the farthest, covering a total of 4,683 km. The 2nd most wandering bird was “Ikaros”, a 4-year-old bird that covered around 3,220 km. 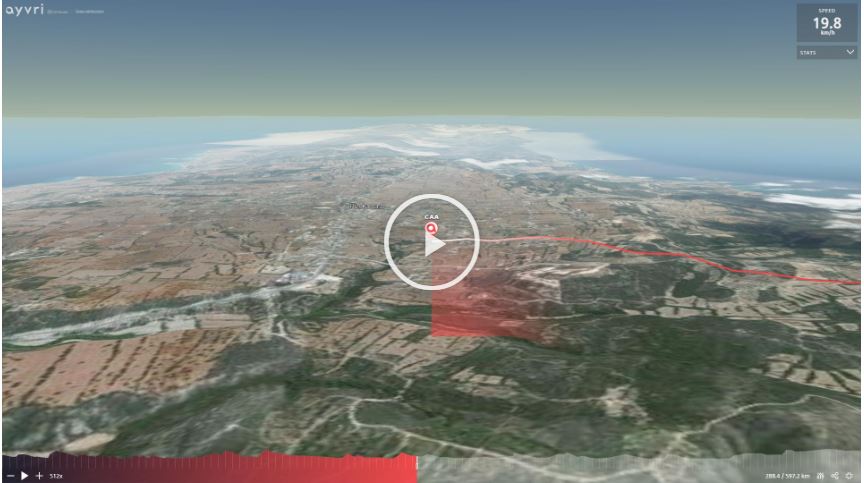 GPS tracking data showed that “CAA” wanders to areas that no other local vulture does (or at least no other GPS-tagged or observed individual). However, in the past, Cretan birds that were imported to Cyprus under Project “GYPAS” have explored similar areas. Most of these areas are located far away from the usual home and core ranges of the Cyprus Griffon Vulture population. During the timeframe mentioned above, CAA almost covered the whole coastline of Cyprus, exploring districts unusual for the species such as Nicosia, Larnaca, Famagusta, and even Kerynia, flying over Pentadahtylos Mountains. One day, the bird travelled Episkopi along the coasts of the city, to Larnaca, Famagusta and overnighted at Rizokarpaso on the Karpasia peninsula. The following day, it travelled back to Episkopi following the same route. Furthermore, CAA visited other historical feeding and breeding grounds of the species on the island. It also explored areas in Paphos district such as Polis Chrysochous, and reached the very tip of the Akamas Peninsula.

The more we know about the vultures’ ranging behaviour and other spatial parameters such as mean daily distances covered and seasonal changes in habitat use for roosting and foraging, the more we can do for the conservation of this scavenging species. The project team will continue monitoring the birds’ movements throughout the project to assess feeding station use, recolonization of historical breeding colonies, and the acclimatization level of the birds imported from Spain to reinforce the currently depleted population.

So far, CAA’s travels show that the species can easily travel to explore the whole of Cyprus. This suggests that if other conditions were right (population level, food availability at a wider distribution, reduced disturbance at potential nesting sites, reduced poison bait use) the vultures would not be disinclined to explore new areas and recolonize abandoned breeding and foraging grounds, subsequently expanding their range on the island.